One Person Injured In Crash With Stolen School Bus In Cypress Hills, Brooklyn On 63 Montauk Avenue 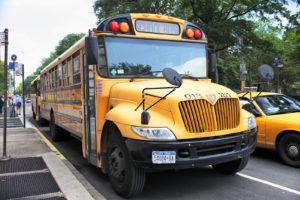 BROOKLYN, NEW YORK (September 30, 2021) – At least one person was injured after a group of teenagers allegedly stole and crashed a school bus on 63 Montauk Avenue.

New York City police officials are saying that the collision took place around 12:45 p.m. on Wednesday, September 29th. Two teenagers stole a school bus in Canarise and took it for a joyride before crashing into four parked vehicles.

One person was getting into their parked car at the time the accident took place. They sustained injuries but were able to walk away from the crash on their own.

Police are still trying to find the suspects who were able to flee the scene after the Brooklyn school bus crash.

Motor vehicle theft has been on a continual downward trend for the last 30 years. According to one report from Value Penguin, “Since 1991, the overall level of motor vehicle theft has decreased by 55%. Motor vehicle theft cases dropped from nearly 1.7 million in 1991 to 748,841 in 2018.” This can be attributed in large part to better anti-theft technology as well as better law enforcement methods at preventing theft. There are a number of reasons that a car, bus or truck may get stolen.

School bus drivers are held to a very high standard in terms of safety. They must exercise all due care in order to avoid causing collisions. According to New York Vehicle & Traffic Law 1146 (a), “Notwithstanding the provisions of any other law to the contrary, every driver of a vehicle shall exercise due care to avoid colliding with any bicyclist, pedestrian, or domestic animal upon any roadway.” Failure to exercise due care on the part of a school bus driver could result in them being liable for a collision.

As a general rule of thumb, drivers are not liable for accidents when their vehicle is stolen and then crashes. But New York does have a statute which allows for an exception to this common law rule. According to New York’s Vehicle and Traffic Law § 1210(a), drivers can be held liable for accidents if they leave their keys in the ignition and their car is stolen prior to an accident. A car with keys in the ignition is an attractive target for thieves and opens the door to a potential negligence claim.

Consider, for example, the case of Johnson v. Manhattan & Bronx Surface Transit Operating Authority. The New York Court of appeals held that the defendant violated Vehicle and Traffic Law § 1210(a) by leaving the bus they were driving unattended, having the windows unlocked and leaving the safety switch not engaged. This allowed the thief in that case to enter the bus and start it with the push of a button. The accident resulted in the death of two pedestrians.  Victims of bus accidents tend to suffer very serious and costly injuries including:

The FMCSA requires commercial buses that can carry 16 or more passengers to have at least $5,000,000 worth of liability insurance. Any person that is injured in a bus accident may be able to seek justice through a bodily injury claim. Damages in a civil claim can help cover lost wages, medical bills and pain and suffering. Sadly, though, bus companies will often fight extremely hard to deny any responsibility for an accident. A Brooklyn school bus accident attorney can examine all of the unique facts of your case free of cost and let you know what your legal options are.

We at Gersowitz Libo & Korek, P.C. extend our best wishes to the person injured in this school bus accident. Any person that may have information about the accident or suspects should reach out to police. The suspects should do the right thing and turn themselves in. This was a senseless and preventable accident that could have easily killed someone. Was this bus left unattended? Did the bus driver leave the keys in the ignition? Could this accident have been prevented? It is our sincere hope that measures will be taken to better secure the school buses used in Brooklyn.

Have you or someone that you care about been injured in a Brooklyn bus accident? You may be entitled to support to help with your recovery. Our team of personal injury attorneys are here to answer any questions that you may have. We are committed to getting accident victims the information that they need so that they can make informed choices. Whether you just have legal questions or need help after an accident we are here for you. You can reach out to us anytime at (516) 908-9792.